A Mini Review: The Deep Exhibition

Really looking forward to heading down to the Dreamworks Animation exhibition, but before this, we went to The Deep exhibition. Here's a mini review of the exhibition.

We went early on a Sunday morning to the Arts Science Museum to avoid the crowd. But our fears were premature as there was no crowd to speak of. Perhaps it was the publicity (the lack thereof) or the content of the exhibition that didn't have much of a mass appeal. Either way, it must be said this exhibition was the largest collection of deep-sea creatures on display in Southeast Asia and it was truly impressive.

Naturally, the entire walk through was kept dark and ambient sounds were made to sound like the deep-sea. A well curated and interactive exhibit - certain sections allowed quiet reflective reading whilst others allowed you to watch videos, admire art installations and even create your own deep-sea creature from recycled materials. The latter was overrun by children who made sharks, jellyfish and octopus-like memorabilia. 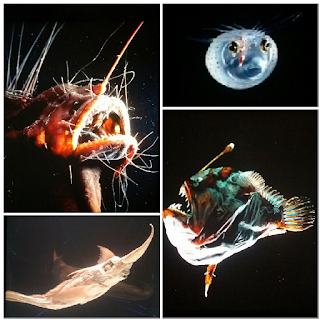 What was most impressive was the photography. We're looking at 2000m below sea level? As I learnt, the Abyss was hardly the deepest at all. Despite such depths and the high pressured environment, the clarity and definition of the fishes / creatures taken were mind-blowing. The collage above does not do justice at all, but it was hard to take good photos of photos.

As I read the descriptions of these deep-sea creatures, I learnt that so many were still unidentified or unnamed. Majority were unrecognizable, apart from the infamous anglerfish as popularized by the movie - Finding Nemo. A great number of them were scavengers since they were living in regions so deep that flora and fauna could not survive. In such harsh environments, some of these creatures had to wait weeks before they come across a scrap of food, leftovers from those living nearer the surface.

Intrigued would be the key word describing the experience of The Deep.

But even that would not be enough. These are quite literally alien creatures to us all, they look nothing like the fish on our dinner plates or even those we see in huge aquariums. They live in an area so dark, no plant can survive.

Here we are building rockets and satellites to find life forms on other planets, when the sea itself, on our very own planet, is so full of creatures we can't even imagine.

Ending of with this creature called the Dumbo Octopus, just because I think it's quite cute looking. 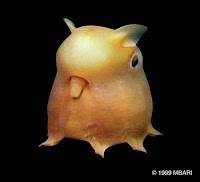 Email ThisBlogThis!Share to TwitterShare to FacebookShare to Pinterest
Labels: museums