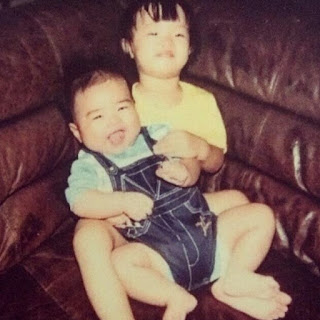 I shiver at the thought that I could have never had a brother. My parents were not planning on having another child so soon, but by some divine intervention out he came just a mere eighteen months after I was born. Wouldn't trade this dude for the world.

It's not easy being my younger brother. I was (is?) domineering, possessive and extremely jealous as a child. I pushed him, bit him and even 'disciplined' him to whose benefit I know not. Then in my teenage years, I got so busy occupied playing the rebellious daughter I totally neglected him. Now that our relationship has improved and we've grown so much closer, I regret having wasted so much time NOT enjoying time with him. But I look forward to the wonderful years ahead.

Looking back, here are some things about younger brothers that I've come to appreciate -


If you can't decide whether that dress is flattering, you simply have to ask your younger brother. They are bound to tell you the truth. The downside is they will also include comments that you and I deem unnecessary.

Me: Hey, do you think I look nice in this orange top?
Bro: No.
Me: K, thanks.
Bro: It makes you look jaundiced
Me: Okay. Thanks.
Bro: By the way, sleeveless tops make your arms look super flabby.
Me: Shut Up!

Where fathers, older brothers and boyfriends hesitate to hurt your feelings with the truth, younger brothers always let you have it. In your face!


When I have a bad day, I know I can go to him for a laugh. In fact, he usually feels it without me having to tell him. Scary PMS sister radar maybe.

Bro: Hey Jie, want me to show you my new skill?

Proceeds to do a back flip unsuccessfully landing on the floor in the most awkward position.

p.s. he carries humblet so carefully, you'd think she was made of porcelain and he tries to stop her from crying by speaking to her in 'whale', like Dory in Finding Nemo. Everyone needs a silly uncle and I'm glad humblet has hers.


When you want to do something but your mum thinks it's too dangerous - get an accomplice. He's always the younger and cuter 'persuader'. Cue Puss-in-boots watery giant eyes.

We build homes out of cardboard boxes and chucked the toys that were in them. We skied (and fell mostly) till our butts were sore. We climbed under giant drains in search for lost treasure, mainly in the form of insects. We built cities out of lego bricks only to pretend to be dinosaurs and stomp all over them.

If I didn't have you as a brother, I would have been even less normal than I am now. Without you, I would have never learnt to ride a bicycle, swim or roller blade. I only persevered to accomplish them because I wanted to lend you courage. Yet in every instance, you succeeded before me and lent me courage.

I'm sorry for having made you a left-hander, although I'm still pretty sure it's not my fault. I'm also sorry for not showing up all those times you wanted your big sister around.

In spite of all these shortcomings, thank you for being more like a big brother to me. Protecting me, including me and most of all making me laugh.

Do you have a younger brother? How was it like growing up?