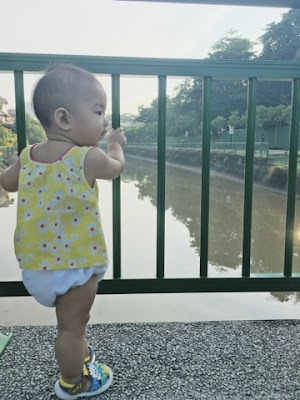 
People tell me she's not just cute, but really cute. Also, I'm told she has perfectly shaped lips and well defined eyebrows. On closer inspection, others tell me her eyes are just like her dad's, big with long eyelashes. Apparently, she's tall too, and has long legs.

Every. Single. Thing. is about how humblet looks.

Just to set the record straight, I'm not saying humblet is not cute. It's just that there's so much more to this little girl!

Here are some suggestions based on my recent camera roll -

Humblet loves to go for walks along the park connector and recently tells me this by crawling to the stroller and shouting at me. 'Bring me out now!' she seems to be saying. I'm glad that she prefers to company of trees, flowers and dogs over shops and malls.

She often tries to stand and walk without support, resulting in random bumps on her head.
But she's also brave, in that after she falls, she usually cries for approximately three seconds. Of course, it depends also on the intensity of the knock. Try to sit her on the floor and she might end up using your knee / shirt / arm to hoist herself back into a standing position. Perhaps she's also an ambitious little creature, desiring to walk before her time.

Someone asked me at the foodcourt two days ago, looking at Mya's bowl, 'will she eat all that?' She might. And also have a second bowl and just maybe another after that. Looking at her attempting to grab the food off our plates when we have meals together, I'm hoping (fingers crossed) that my daughter will not be a picky eater.


Here's a snapshot of what she eats in contrast with our dinner. The same ingredients done differently.


Now she gets excited when I flag the bus down and she shouts at the bus driver when the doors fly open in greeting. She loves it when strangers play peekaboo with her in the train and in the shopping mall near our place. Thank you kind strangers! I could never do that without first dying from shame.

She's also developed her own goodbye wave which honestly looks more like the fortune cat motion. It is hilarious. Babies are hilarious, don't you agree?


A month ago, she enjoyed eating books, meaning chomping the corners of books. More recently, she likes pulling them off shelves. This could be my fault for always letting her loose in the library. And just yesterday, I learnt she could turn pages on her own and would sit there figuring out the pop up flaps x100. I'm hoping this would translate into a love for reading. But at the moment, I'm just glad she enjoys our weekly trips to the library.

So you see, there's a lot of other ways you could describe little Mya other than cute. But of course, thank you for all the love and gifts she receives. We cannot be more grateful.

In essence, I'd like to think I'm raising a child and not grooming a doll. A child who will enjoy the sunshine when we're outdoors and be enthralled by stories when we're indoors. A child who loves interacting with children and adults alike and a child who will enjoy childlike innocence in her childhood. I hope to raise an alert and active child, who will grab me out of the house to cycle, to swim and to play. A little girl who will always reach for my hand rather than reaching for my gadgets.

In that light, I hope you too can see beyond her looks and observe her character and behavior more keenly. You'll be thoroughly amused and perhaps even amazed by how much you can learn from watching a young child take in the world around them.

This weekend we have lots to do including a swim and a friend's one year old dinosaur themed party!