THE STRUGGLES OF A MARRIED 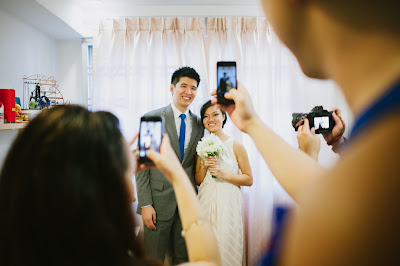 There are too many articles entitled <The Struggles of Singlehood> or <Dealing with Singleness> out there. As a single, reading these articles left me occasionally in tears, but more often than not rolling my eyes. Allow me to contribute my share of struggles as a married person, in part to assure those who are single, we struggle too. But more so to the married, struggles are to be expected, and that these do not have to end up being unmarried. If you'd like to read the struggles of this married couple -

J.G. and I are polar opposites. In group settings, I am usually talking all the time whilst, he's sitting back, folding his arms and listening quite happily. When it comes to work, I prefer the quickest, most efficient (not necessarily the most effective) method. He tends to wait till the thirteenth hour, then burn the midnight oil and rush the job. The list of differences goes on until eternity.

Point is, these differences may have drawn us together in the first place, but they are the same cause/s of conflict within our marriage.


Rather than being guilty of saying that to Humblet, I say this phrase to my husband a lot more. I'm a complete 'seize the day' type of irritating morning person whilst, he loves to hit the snoooze button. So again and again, I hear myself say things like, 'come on, let's get going' or 'be quick about it'.

The struggle here is the difference in the way we perceive time.

He takes his time because he sees no real need to hurry, as long as things get done, it is fine if they take awhile to do it. Bath time with baby can take a whole hour, playing, singing, scooping and pouring followed by a towel chase, then a full body massage and finally, she's dressed.

Initially, this really got on my nerves. And that is a gross understatement. I'd roll my eyes, 'tsk' him the whole way or use my sarcastic tone. When all the above didn't work, I might on occasion even raise my voice. Then all he did was to do things even slower than before, just to irritate me.

Then we learnt how this could work out for us both - not compromising, but complementing.

Just think about it, I spend eight or more hours a day with Humblet. All day, every day. Everything is fast-paced, activity filled because of the way I perceive time. So when dad comes home, it's wonderful how everything simply slows down to his pace. She takes ages to get his shoes packed into the shoe cabinet. They laze around in the living room or take an hour long walk downstairs while I prepare dinner. Then they laze around some more, reading books, lying on cushions and doing nothing in particular. To end off the night, there's that whole hour long bath business, which has really become "me time". I sit and am able to reading for an entire undisturbed hour! Most stay-home mums never even get to read anymore.

Rather than him speeding up and me slowing down, we continue on very different paced lives. Except that now, we both learn how best to work with each other's schedules such that it complements.

2. Can we please talk about it now


We have a fight an hour earlier and we're both sitting upright in bed, because of our house rule not to sleep angry with one another, seething in anger. And I would turn to him and say, 'can we please talk about it now'. The men are rolling their eyes thinking - typical. And you're right, women are generally the ones who want to talk about it immediately. They want to get their emotions out there, cry it out and end it at once. But that's not the way most men handle conflict, at least not in my mainly Asian culture and context. In particular, for J.G. he needs time to think things through, process his emotions quietly on his own and simply cool down.

I used to hate this waiting and I would cry or walk away. This only made things worst. Walking away was akin to turning my back on him and to him that was a huge no-no. You never walk away in an argument like you never walk out on your marriage. That was of course not my intention, but for him to perceive it in such a way was bad enough.

There's a struggle in the method of confrontation.

He wants to argue on his timeline and I want to argue in the peak of my anger. Those times he gave in were awful; and you can imagine we never really 'talked about it'. It almost always made matters worst to try and talk things through there and then because angry words are almost always hurtful words.

There is no way to prevent confrontation in marriage. In fact, in any human relationship, but what is more critical is the way these are handled. Especially so in the intimacy and proximity of marriage. I'd love to say, if possible don't quarrel in the evenings. But it's usually in that place of exhaustion and wound up state from a stressful day that these emotions break through the dams of self-control.

So I'll say this instead - Always choose to reconcile and as soon as it is possible.

Always take the path of reconciliation, even when it doesn't seem to be in your favour. This is because staying married is so much more than winning an argument.


The human race is an easily discontented being. A rich person never has enough money. A carefree child never has enough play time. An elderly person never feels they have lived for quite so long enough. As such, many of us are attracted to those who perhaps reflect our inadequacies. Simply put, we find someone totally different from us more attractive than someone like us.

Even before we were dating, I found myself drawn to J.G. precisely for the character traits I lacked. The quiet sincerity he had whilst listening as another person shared their struggles. His relaxed and seemingly stress-free personality. The easy way in which he made friends, and how he enjoyed sports without being competitive.

It's true that opposites attract, but in a marriage, it is important to stay attractive.

The struggle is one of complacency. Perhaps better phrased as the struggle to stay in love.

When you've been marriage long enough, you tend to take being married for granted. Worst still, you being to take yourself for granted.

I came to that low point when I was breastfeeding my then infant child. My tops could be worn three days in a row, covered in a whole geography of milk stains. My hair unkempt and my eye bags nearly touching the floor. It got so bad one day, J.G. walked in from work and jokingly went, 'who are you?' Although he meant it as a joke, the question continues to haunt me even now. I remember being afraid of looking at myself in the mirror for days after that.

I'm not saying we need to be dolled up and have our faces painted all the time. Neither am I saying you can't let your hair down in the comforts of your own home.

What I am saying is that a little effort goes a long way in marriage.

For the girls, washing your hair regularly. Putting on a dress for date night and even a bit of make-up. Wearing heels to his company function, or even doing your hair.

For the men, respecting your wife's tastes. Booking that restaurant, ordering that bouquet. Most importantly, noticing the effort she puts in, even if it's that teeny bit.

And with that I've really got to go to bed. It's my wedding anniversary tomorrow, I want to look my best you know.


Cheers to the struggles of married people!