TURNING THE TABLE ON TERRIBLE TWOS 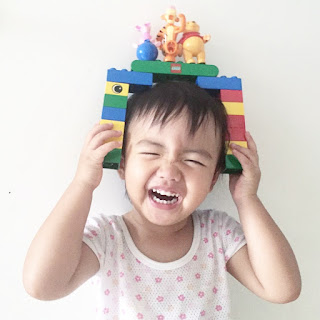 The only terrible thing we’ve experienced thus far is her contracting HFMD (Hand Foot Mouth Disease) and she doesn’t even go to Childcare. Nonetheless, thank you for all the love, she’s recovering well. In fact, she hardly seems to be affected at all, apart from the lack of appetite.

We’ve had a few (okay, actually a lot) of parents come warn us about the ‘Terrible Twos’ that Humblet is supposed to morph into. As parents, we’ve decided to take our stand against this theory and here’s why -

1. THE POWER OF WORDS

“I’m bad at Chinese, I don’t want to learn it anymore” said a five-year old to me, when I was given the immense task of helping him revise for his Mandarin Spelling Quiz. Someone had told him he was bad at a language that he already had no impetus for learning. What I couldn’t understand was why a child that young needed to be judged on his language learning ability. And most baffling was his firm belief that those words were true.

So often we underestimate the power of our words, but after becoming a parent, I can and should no longer ignore this responsibility.

This afternoon when I stubbed my toe against the edge of the dining table, Mya laughed and said, ‘silly funny mummy’. I did a double take and when I stared at her in disbelief, she proceeded to say the phrase again. Where did she learn those words? Surely, I must have said these often enough for her to articulate them independently.

It’s the same thing with the “Terrible Twos”. If I attributed all her naughty acts to this phenomenon, then I won’t just be giving her a reason for her bad behaviour, I’d also be reinforcing it with my words.

Instead, I tell her she's so blessed that she will be turning two and how grateful we are to have her in our lives. When people ask us in front of her if she's grown horns yet or turned into a terrible two yet, we tell them (and her) that she has not and will not. We believe she will have many cheeky and even naughty moments, but in those times we will discipline her in love as we have been from the very beginning.

Another manifestation we’re warned as parents is that these toddlers would be eager to assert their choice, most commonly at the dinner table. ‘I don’t want vegetables’ or ‘I want snack snack’.
Humblet might be a foodie, but just like any human being, she has preferences when it comes to food. At lunch one day, she declared she didn’t want any vegetables. But just as I was clearing her broccoli into my bowl, she started crying and demanding to have them back. I must have looked at her confused, because she went on to explain (in all seriousness) that broccoli was broccoli and not a vegetable. What?

Point is – I cannot tolerate a picky eater. In part, I’m impatient and the other reason is because I spend a lot of time planning and preparing these meals. The rule at our table is

“you don’t have to finish it, but you must at least try it.”

If there’s a huge fuss and the “all done” hand sign is done multiple times, the food is taken away. We hope to drive home the message that when dinner is served, dinner should be eaten until one is full. We also respect that she can tell us when she’s done, and if she is she will get no snacks after unless fruits are served.

Some mums have seen this in my house and they tell me I should never starve my child or that I should not allow Humblet to go to bed hungry. Why not? Hunger is a great teacher in my opinion. Hunger teaches her that she has to wait until her next meal, it also teaches her to treasure each meal in front of her and most of all it makes her excited about eating. And I can assure you, she loves her food. She might not finish all of it, but she would have tried every item on her plate.

There is no human being who would ever reach their quota of being commended. Yes, there are spoilt children who are praised incessantly, and possibly for all the wrong reasons. There are also adults who quickly deflect compliments away from themselves. But these do not mean we get enough of being affirmed.

Some children prefer verbal approval, others might be more inclined to physical encouragement and still others like to enjoy receiving tangible rewards. Point being, no child hates being praised. In fact, affirmation usually does a lot more good than a harsh word.

Early on when Humblet first started attending a little play group in church, I would frequently tell her not to do this, not to touch that and so on. An elderly caregiver gently pulled me aside when Humblet was enthralled in the Bible Story, and told me to try using positive phrases instead. Say if she took her markers and drew all over the sofa - I would say 'markers are meant to be used on paper, let's draw here instead' rather than my usual terse 'don't draw on the sofa'.

This worked wonders for Humblet when she was much younger. Now that she wants to test boundaries and assert herself a little more, I also have to counter that with slightly more effort. Take for instance I tell her to pack her Lego and she pours them all out instead, my initial response would have been to reprimand or to point the finger. But what I've found to be much more effective is instead to kneel by her side and say, 'let's pack the toys together and once we're done we can have our lunch!' After we've done this together, I praise her for keeping them so well claiming no credit for myself.

From watching more experienced mums with their kids, I've learnt that affirmation goes a long way in cultivating good behaviour. Rather than telling criticizing a wrong-doing as a character flaw - 'you're so slow' or 'you never listen', children ought to be taught that it is the act that is bad and not themselves.

Have you praised your child today?

This is a post I’ve been itching to write about for a while now, but I told myself to put it off until Humblet turned two officially. So here it is!

There is still much I have to learn about parenting and with Humblet, there's really so much trial and error. But I'd say, let's take a second look at our children and realise that maybe there's more myth to 'terrible twos' than we think.