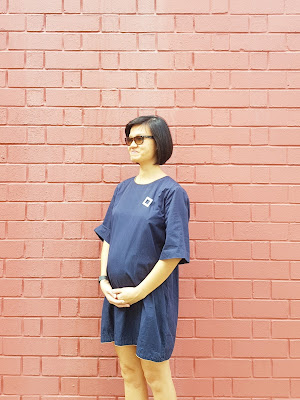 Unbelievable as it sounds, we are already halfway through this pregnancy. It is no understatement when others tell me, each pregnancy is different from another. With Humblet, the second trimester was a disciplined time of gaining weight, exercising and preparing the home for her arrival. Little Bashful, who has been hiding his or her gender up till now, has been a rather pleasant pregnancy thus far. Some morning sickness during the first trimester, but that’s all behind us now. Here is the full baby bumps account at week twenty –

Baby is about the size of a Banana
Weight: 280grams
Height/Length: 15cm

How is Humblet taking to the pregnancy?

She is totally excited. We regret telling her so early because she’s been bugging us non-stop about why Bashful is still in my womb and not coming out to play yet. She hasn’t decided which gender she wants the child to be. Each time someone asks her, she gives a different answer. I hope she knows that the gender of the child is already fixed.

In a really earnest way, Humblet has been practicing “big sister” roles with her stuffed animal friends. She cradles them carefully, lays out the changing mat and tells me she’s practicing diaper change. Now when she plays at home, she will declare which toys she will share with Bashful and which are the toys she cannot share because they are “too dangerous for babies”.

On mummy’s end, I have been feeling much like a recluse this pregnancy. We have had nearly no guests at our home this year, compared to weekly gatherings in the last two months of last year. Mainly because, my bedtime has shifted to eight in the evenings to half past four in the mornings. It’s a little hard to invite people for breakfast at dawn. But somehow my body starts to wind down when the sun sets, and as J.G. reads Humblet her bedtime stories I find myself exhausted and the next thing I know, its five and the day begins again. And in all honesty, I am loving the peace and quiet. Mums' with toddlers know how precious the commodity of quietness is.

In the meantime, we are hoping for a good report next Gynae visit. From around the time of the last post, doctor discovered that the placenta is precariously low, which may prove risky. In light of that, I have been advised to avoid strenuous exercise for now and get bed rest whenever cramps come on. This pregnant body is aching for some exercise as my hips expand beyond my control.

How did you prepare your older child for a sibling?

Was your first and second pregnancy similar or very different?

If you are in Humblet’s position, would you want a little brother or sister?

Have a great weekend!