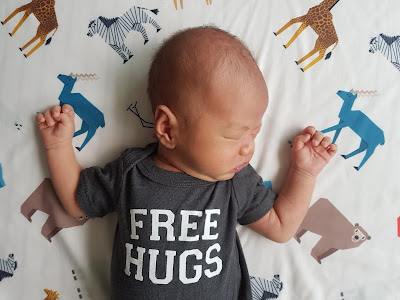 
We were a little apprehensive about our second child’s birth to be honest. Humblet's was straightforward enough. The water broke at 2am, we had to go to the hospital. This time, we wondered if I would recognize the contractions for what they were. After all, I had been having some serious cases of Braxton Hicks with this fellow since week twenty-seven which made me very confused. If these were fake contractions, how would I know what real contractions felt like?

So on Thursday when the contractions started, I had serious doubts and just ignored them. Going about my day as per normal, doing twenty flights of stairs for a workout (I did these vertical workouts with Humblet too, from the thirty-seventh week onward), cooking lunch, taking a nap and then playing with Humblet in the evening. By then these contractions were pulsating and could be seen externally. We timed them to be seven minutes apart before we made preparations to go to the hospital.

By quarter past eight in the evening on the 26th of July, we sent Humblet to my mum’s for the night and made our way to the hospital. Strangely enough, after a whole day of these contractions, they came to an abrupt stop a little past midnight. I only know because the ward nurses kept coming in and out to monitor this and that. Doctor told us we could either go home the next morning and wait some more or he could induce the labor since Singlet was past thirty-eight weeks by that point.

J.G. and I both gave Dr. P the same answer separately, he was very amused. The admission had been processed and I was already warded, we did not see any point in delaying things any longer.

Little did we know, Singlet had plans of his own.

Fast-forward eight hours, the contractions were back but not increasing in intensity. I was bored out of my wits, we told them to remove the monitors strapped all over me so we could go for a walk. When Dr. P instructed the nurses to start me on the drip, I thought to myself the wait can’t be much longer. But no… Our son refused to budge, such that at 2pm they had to break the water bag as well.

It was only at around five, the evening of the next day when active labor really started. Contractions went from 2 on a scale of 10 all the way to 8 within fifteen minutes. By which time I was grabbing J.G. by the wrist and screaming (in my head) GET THIS BABY OUT OF ME!

Side note: Some people have asked me, how painful is giving birth? That is a question no one can answer on behalf of another person. It was extremely painful, but not to the point of being brave enough to take the needle for epidural is my answer.

Twenty over hours in the delivery ward with monitors beeping all around me and fitful sleep left me in a less than ideal state for labor. Despite my best efforts at swimming, taking long walks and even topping up my workout with these mini vertical hikes in the last leg, I was exhausted. Thankfully, the pushing only lasted a grand total of eleven minutes. With the help of Dr. P and the vacuum, Mr. Big Head was delivered triumphantly two days after his dad's birthday.

A final word. The moment Singlet was put on the scale, Dr. P laughed aloud and told us we did good deciding for the induction. Even for 38weeks, our son weighed a whooping 3.4kg, was 53cm in length and had a huge head circumference. Any larger and he would have recommended me to go for a C-sect instead, something I really dreaded. Whatever his measurements, we were just relieved that he was safely delivered and we look forward to spending the rest of our lives with this little family of four.

We want to say a big thank you for all who cheered us on when you knew we were at the hospital. Although I was adamant about not having visitors, I know many of you had asked to come and sent your well wishes instead. We are very grateful for your generosity and love towards us with the birth of Singlet. For those who want to read the full story of Singlet's medical condition, you can pop over to our family blog page ouranimatedjourney.blogspot.com