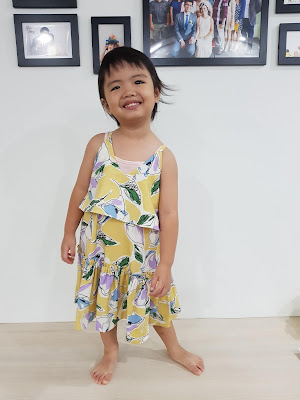 Recently, I purchased a few pre-loved dresses via Carousell (an online platform for people to sell mainly used items in Singapore) for Humblet since she was outgrowing most of her three-year-old clothing. When the package came, I could tell immediately that the dresses were worn and I was worried that Humblet would be upset mummy bought her "old clothing". But instead, my beautiful little girl hugged me tightly in gratitude and started to twirl and pose as she tried on the pieces. Exclaiming while she danced, "these are so pretty mummy!" The fact that she is my daughter makes me feel like I own the whole world and so much more.

Morning sickness, dizzy spells and a labour that went on for more than twenty hours could not prepare me for what the doctor told us on the third day after Singlet was born. “Your son has a murmur in his heart”. Its loud enough such that you could hear it if you put your ear against his back. A dull thump, an extra beat akin to someone clapping off rhythm during a song.


Heart murmurs were common enough, apparently I had one as an infant and mine closed naturally. So naturally I don’t even recall ever having one, my parents tell me it barely affected me at all. But the cardiologist who did an ultrasound on Singlet’s heart measured the gap to be 4.98mm, a staggering size for a child who was only 3.5kg and 53cm in length. What could this imply? Well several things.

The potential of an overworked heart meant it could become enlarged over time. A swollen lung, because of the leakage of de-oxygenated blood into the lung chamber. In the worst-case scenario, he would require open heart surgery. Were there any alternative types of surgery? Not in his case, no. The position of the hole, right under the septal flap meant it needed direct intervention.

Getting over the shock of the news was one thing, dealing with symptoms was a whole other tricky situation. He has been on medication since he turned three-weeks-old. He takes two doses a day, the medication is meant to alleviate breathlessness by removing excess fluid built up in his swollen lung. This translates into more thirst and therefore more feeds. Additionally, this extra effort required while breathing makes drinking milk tiring and so he often has to take breaks every few minutes else he might choke and at times he just falls asleep panting mid-feed. Post-feed sees him breathless, panting, as if he as run a 100m sprint. This too means more feeds a day, we are talking about 10 to 12 feeds where the average infant does 5 to 8.

Thank you for journeying with us, asking us for updates and sending us so much love and encouragement. Parenting a newborn is no easy task, but each day's struggles translates into another day of growth and another day of hope.