How do you discipline your children? 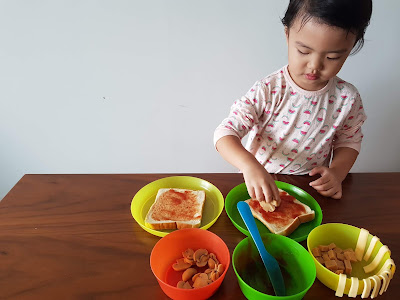 Recently a fellow stay-home mum friend asked me the question, “how do you discipline your children?” I realised I had no ready answer.

How do I discipline my children?

Every child thrives on a predictable schedule.

Why should I be expected to sleep well when bedtime is a different time every single day?
How do I know what is expected behaviour when sometimes I get scolded for it but at other times its okay?

When Humblet doesn’t go to bed readily in the night, we know we’ve missed a step in her night routine. Thankfully, now she can tell us what it is we forgot. “We have not read our devotion yet” or “I haven’t prayed for all my friends”!

When they see a pattern they recognise, done by people whom they love and trust, they begin to do the same or expect the same behaviour.

Kids might be kids, but they have their pride too. And we want to protect that, so they grow into self-respecting independent adults.

In that line of thinking, we avoid any form of harsh discipline in public. This might include berating the child, shouting at them or smacking them in front of others. Even when we have guests in our home, we try to “save face” by taking Humblet into another room should she need a good spanking or talking to after multiple warnings.

We trust Humblet to be able to apply these lessons she’s learnt at home wherever she goes. And so, we reserve the harshest punishments for the home, where she feels safest and most loved. The old adage remains true to this day – spare the rod and spoil the child.

How do you punish your children?

Battles to fight and battles to be won

As a parent, to prevent sheer exhaustion, as in running around a suicidal toddler isn’t enough, we must ask ourselves is this a battle worth fighting?

Humblet loves experimenting with her food. She pretends to cook “porridge” by adding heaps of soup into her rice bowl then stirring in all the ingredients. The other morning, she saw me spreading pancakes with butter and wanted to do the same, except she did it with tomato ketchup. It was hard not to laugh when she put a piece into her mouth and spat the whole lot out almost immediately.
I’ve had so many mums come and tell me that I ought to scold her for playing with her food. But you know what? That’s not a battle I have to win. She might play with her food, but I can tell you she also eats like a champ. And that’s all I require of her. To eat well.

Point is, as parents we must decide which are small acts of mischief we can overlook, but at the same time which battles we have to win.

Here are some things we allow Humblet to do –
Experiment with her recyclables and craft stuff (look under “try for yes” for more information)
Have dessert with our guests past bedtime
Decide how she wants to play with her toys (make a lego train track for her stuffed animals? sure!)
Choose the type of art or craft she wants to do on weekends

Within reason and sometimes without, we try our best to say yes to Humblet when she asks. We try to say yes because we choose to believe there’s a reason why she is wanted to do something, even when we cannot understand it. We try to say yes because we realise we say no too readily and too often, because it’s easier and faster to get them to do what we want. But what about what they want to do? And so, we try for yes.

Here are some things we have said yes to –
Can I build a tent with my blankets?
Could I have both Nutella and Peanut Butter on one slice of bread?
May I try cutting up the food for dinner?
Can I try growing these pumpkin seeds? (She put them in a cup of water, so nothing happened)
May I try drawing with these candles?

The other day I caught Humblet putting strips of paper into a flooded sink. It was a split-second decision whether to scream at her or to ask her what in the world she was doing. Thankfully, I went with the latter.

To satisfy your curiosity, she wanted to test what happens when she dipped paper into water. She went around the house looking for four different types (textures) of paper, cut them into strips with her craft scissors and was waiting to see what happened when I stumbled in on her. Rather than let her experiment dissolve into shreds (literally), I suggested we hang them out to drip dry and check on them in the morning. She was super excited and ran out of her room to check on them the next morning. She learnt that glossy magazine paper kept its original shape best compared to coloured paper, newspaper and cardboard. 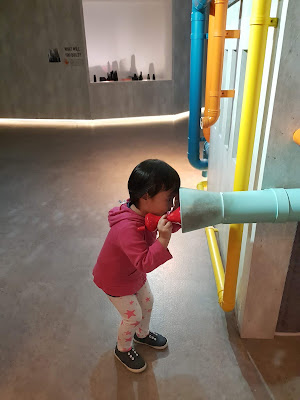 In Humblet’s most recent tantrums, we’ve been noticing a trend. Once she gets past a certain point, there’s no turning back. Meaning no amount of logical reasoning (or shouting for that matter) will work with our child.

Take last Sunday for example, we were about to leave for church and told her to do the usual toilet routine before leaving. At this point, she had already excitedly put on her bag and shoes and was hurrying us at the front door. She refused to budge and started crying when we insisted. This crying became full on screaming and then kicking up a storm on the floor. We kept saying, “once you’ve gone to the toilet we can go”. But she wouldn’t have any of it. Until it became full on uncontrollable sobbing, it was impossible to get her to do (or hear) anything.

We learnt a lesson on parenting there and then. When a child is that agitated, no amount of logic would apply until the child knows she is loved and has calmed down. Her dad picked her up, held her until she stopped shaking, after which he gently expressed empathy by recognising her excitement to go to Sunday School but also requiring her discipline by reminding her that we go to the toilet before we leave the house. And she complied instantly! What!

Children lose all logic when they dissolve into a tantrum, what we can do as adults is replay the scenario in our mind, show empathy and when they’ve calm down to then require obedience. If we give in because junior throws a tantrum, they are going to realise that the way they get what they want is by throwing a fit.

I know what you're thinking. How long will this take right?

It felt like forever to be honest. And I was on the verge of dragging her to the toilet by force. But I can’t out power her forever, so I need to take this time to win her trust, earn her respect and show her I mean what I say when I tell her I love her. And this takes time.

These are some of the ways in which we discipline our children. Every child is different, and we recognise that there's no one size fit all type rule, but we know that a parent who disciplines is a parent who loves.

Share with us some ways you discipline your children! We'd love to hear your views!