WHAT TO SAY WHEN A CHILD IS SICK 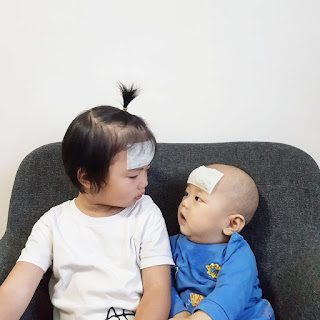 Processing a lot of thoughts and reflections since we since got word that Humblet’s best friend from school was diagnosed with cancer, a few days shy of her fourth birthday. Some of the emotions are still pretty raw and as this precious child fights cancer, goes through round after round of chemotherapy, our thoughts continue to be with her, and our prayers surround her daily.

This post is one of the many things we first struggled with, that is what do you say to someone when their child is sick? If you would like to read on –

Well, to be very honest, I hate it when people tell us it’s okay each time we share something bad that happens. So the first thing NOT to say for us at least, would be “it’s okay” and to the child “everything is going to be alright”. That being said, I know full well lots of us say "it's okay" as a form of comfort, and we acknowledge that.

The child is sick. It is certainly not okay to have a sick child. Also, why do we tell the child everything will be alright when we do not know ourselves.

Let’s stop hiding behind niceties and stand in solidarity with the parents and child. Let’s be brave enough to stand together and say “hey, you know what, that’s awful. I’m so sorry this happened. It’s really not okay at all.”

Often times, we worry that we are adding on to their sadness or discouragement by saying something negative but think about it - When you are crying or worst still in depression, the thing you hate most is for another person to tell you, “it’s alright, you’ll be fine”. Instead, you would rather some one journeyed with you and mourned with you. Same for the parents of a sick child.

Another thing, we had to bite our tongue not to do was to suggest remedies. When we let it be known that either of our kids are sick, we get all sorts of suggestions. Or even worse, we get bombarded by questions – “have you tried this?” “have you done that?”

Let us always assume the best. That is, that the parents have tried everything they possibly know or that is within their means to help their child get better.

Instead, we might say, “I’m not sure if this would help, but this really worked for my kid when they were sick”. Or more generally, “this worked for me if you’d like to give it a shot”.

Then leave it open to the parents or caregivers to decide if they want to try the method out, rather than unintentionally berating them with accusations of “why haven’t you done enough for your child?” Because, that’s really what we are doing when we question them in the first place. Not on purpose of course. But to a tired, sleep deprived parent, that’s exactly how it feels.

Trust me on this. When Humblet had Flu A, I had to switch off my phone in the hospital because every single “I think you need to give her more brufen” or “have you let her do a bloodtest?” made me more stressed than I was already feeling.

Once word went out that the cancer was confirmed, we are sure the parents will be bombarded with questions. What type of cancer. What stage. Where is the tumour and so on.

One thing we decided to do on the onset, was to never ask until we were told. That being said, it was very hard to not ask. We were so worried. When she went in for surgery, after her first chemotherapy session and what not. We were itching to ask all the time if she was okay.

We turned that into an invitation instead – we are here, let us know if you need anything.

The last thing a sick child needs is getting exhausted from unsolicited visits. Much less a distracted parent who needs to reply a hundred concerned texts. Our concern can become a burden when we do not put the other person before ourselves. Step into their shoes, walk around it. Will they benefit from our worry? Do they not have enough to bear?

Instead, avail yourself every now and then. The fight against cancer is a marathon and not a sprint. Surely, we could be of practical help at some point.

Like I mentioned earlier, the emotions are still very raw. My own kids having been in and out of the hospital this year for various reasons. Thank you for reading this post. If it sounded brash at any point, it is probably because I personally was hurt by some of the examples I shared.

Have a friend/s with a sick child?

Pray with and for them. Be with them in emotional solidarity. Send them a hand-written card. There are so many ways we can be a blessing without being a burden. And when they need us, they will know who to call.