There was a mum who constantly wondered why her children threw tantrums. She was puzzled when they raised their voices at her or at one another. Why they often chose the most public and most embarrassing of places to kick up a fuss – in line for groceries, at the toy section of the furniture mall, in the quiet hipster cafe, her best friend’s wedding luncheon and the list goes on.

Then one day, arms akimbo, her three-year-old glared at her sternly at said, “mummy, no shouting!”

And that was the day she realised, with equal parts of shame and horror,

that the mum was me.

Its so easy to pinpoint toddler tantrums, labeling them 'terrible twos' or 'troublesome threes'. But have we put any thought into parent tantrums? Because we can be really mean parents. Just that nobody will label us 'terrible thirties', or maybe they should.

How often do we look at our kids and wonder where they got this bad trait or where they picked up that bad habit? How quick are we to point fingers at our spouse when the children don’t behave the way we think they should? 'They got it from their dad', we tell our girlfriends.

Rather than consider the root cause, do we put the blame on short nap times, late bed times, too much sugar and all those heard before excuses reasons that parents make, us included. How long will we hide behind the mirror and not realise the painful truth, that our little ones are reflecting none other but ourselves? 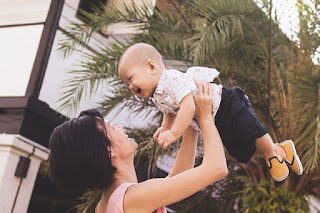 The thing is, our children are more likely to learn and to model after what we do not teach them.
Reason being, what you try to teach them, albeit intentionally, cannot be compared to the volume of “daily life” that they go through with you each and every day. Meal times. Commuting times. Play times. Weekends. Grocery runs. Bath times and the never-ending list goes on and on and on.

There is a Chinese idiom that say “walls have ears”, warning us to be careful about what we say and whom we say it too. Well, in our home, these walls have ears and eyes and mouths too! They are constantly watching our every move, partially because they love us, but more so because that’s how children learn.

They observe and absorb the world around them like sponges. How do you think they learnt to walk, to talk or to eat? They watch us do it every waking moment. When they have mastered the basics, they begin to mimic not only our speech, but our behaviour as well. The way daddy ties a tie every morning, or how mummy flicks her hair ever so often.

While we continue the struggle to parent each day, this awareness of our own negative example really got us thinking. Here are some things we have found to be helpful in dealing with parent tantrums -

At first, we counted loudly, like a time bomb ready to explode in anger at zero. But then we learnt, that did not work very well. It landed Humblet in a frantic, frustrated emotional mess at times.
So now, we count audibly but calmly. By the count of ten on most days, Humblet has completed the instruction or task given her.

Kids can do it if we give them sufficient space and trust. Most of the time.


If you have a toddler, you would know that 'do this' is the fastest way to get them to do the exact opposite. Why do it keep commanding them when they don't listen?

Lunch is ready, but I spy Humblet playing with her lego and is at that moment building a taller-than-her skyscraper with utmost concentration. Do I tell her to put it aside and demand that she eats NOW, or do I go over, praise her amazing structure and tell her to wrap it up in five minutes so we can have lunch?

A lot of the time, they don't 'do' because they are already doing something else. Something that may look trivial to us, but means the world to them. A little deliberation, a little delay may right well be the answer.

'Keep on crying like this and I am leaving you behind.' This is emotional blackmail.

'I know you did not get the ice cream you wanted, and that must feel horrible, but we don't always get what we want. Would you like to decide which type of bun you would like for tea break later?' This is acknowledging their emotions and allowing the child to assert their opinion, but in a form acceptable to you as a parent.

Always remember, they feel before they think. And the best way we can get them moving is to help them 'feel' like doing it even when they don't. Logical processing works only if they are old enough. More then most part, trying to speak sense to a two-year-old is more like winding yourself up for a parent tantrum.

We try to offer a choice where possible. When there isn't one, we try to offer information. Not so much to educated, but more to make the child feel important.

At times Humblet refuses her medication, so I read the dosage on the label to her in a formal, all serious voice. After which I throw the ball back in her court by saying, 'so how many times do we have to take this?'

When these 'feelers' see that you are giving them the independence and allowing them to own the decision, they will usually be much happier and quicker to accede. Not possible in all circumstances, but its worth the shot.

4. Attend to yourself first

Before flights, the air-steward always explains that in an emergency, always tend to yourself first before taking care of the child with you. The reason is simple - you cannot help some one else, if you need help yourself.

Take a minute to calm down. Sit in the toilet for a moment or walk away from the child if you are fuming. I know a mum who has ten kids, so she would be constantly have at least one or two by her side every single moment. When she needed to take a timeout, she would flip her kitchen apron over her head and all the kids would know not to disturb her or risk incurring her wrath.

Yes. The child needs to be disciplined, but its not going to work if you are raving mad. Then the child will obey, but in fear and remain none the wiser.

Do share with us what works for you? What works with your kids?

We'd like to know, because the truth is, the methods above came from watching parents who have been there and done that. So pray tell - how do you deal with parent tantrums?