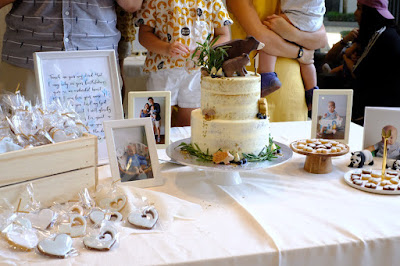 In two days time, Humblet turns four. The Jiblings are a mere two weeks apart in birthdays. Singlet turned a whole year old on the 27th of July, what a whirlwind of a year it has been for us all.

If you have been following dearhumblet.com for awhile now, you would know we are not big on parties or celebrations. Being homebodies, we largely avoid crowds of any sort and gatherings in our home usually revolve around half a dozen guests at max. But we wanted to make an exception for Singlet's miracle and so here’s the story of his big first birthday bash - 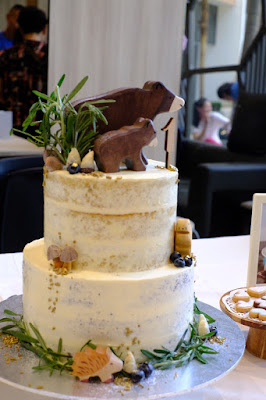 It was an intimate gathering and intentionally so. We had a very personal story to share and we wanted everyone who came to be able to hear it. Relatives formed the bulk of the guest list, together with maybe a dozen close friends. A simple lunch was catered, recycled party decorations were borrowed and haphazardly put up. Friends who drove helped to bring extra stools, we brought along some extra snacks for the little guests, and that was it.

The most elaborate part of the whole party was when the cake lady (also owner of The Plain Jane Cafe) came with the two-tier forest themed cake along with thoughtful wooden toppers as well as little customised heart-shaped cookies. These were beautiful and way beyond our wildest imagination, we are grateful and honoured that she considers us her friends.

Thank you for all for celebrating Singlet’s first birthday with us. We are grateful for each one of you, how you have encouraged and supported us in your own ways.

For those who may not know, Singlet was born with a hole in his heart. The murmur was so loud you could hear it by simply pressing your ear to his chest. While a hole in the heart is a common condition, he was recommended open heart surgery in the very early stages, giving us quite a scare.

We decided to give our son some time to grow first, and so were careful to monitor the symptoms of his peculiar condition. This included breathlessness while drinking milk, exhaustion from simply breathing and a swollen lung.

Despite all this, he continued to grow before our very eyes. Month by month, he got bigger and stronger. Snatching his sister’s solid foods before he could stomach them, sprouting teeth before his sixth month and pulling to stand at the turn of his ninth month. Then, beyond our wildest dreams, this little fighter exceeded even the growth charts of his peers, shocking the nurses at every review. They would take his height, look at the chart, then measure him again to be sure. He weighs as much as most of the two-year-olds around us and certainly towers over most same aged babies.

Even though, we continue to go for regular heart reviews and a surgery is most likely in the works; his current state already far exceeds what we have asked or imagined.

So, thank you for those who have supported us from the very beginning, as well as those who joined us in our journey along the way. We are grateful for every boost, every encouragement and every single one who has been cheering us on.

His first year has been an amazing one thanks to each one of you. Sharing our joy through this simple story, we hope it has likewise encouraged you.

Thank you and again, thank you.
Amy