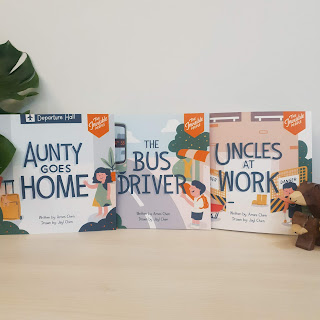 Exactly a week ago, we launched a Children’s Book Series –The Invisible People with Graceworks Publishing. Many are asking us about the background of these books, but allow us to first tell you a little about the books in the series first –


Targeted at early readers from aged four to ten, but suitable for parents and caregivers to read to toddlers as well, these are stories based in Singapore written about some of the invisible people around us. There are currently three titles in the series, including -

This one is about foreign domestic workers. How a family adapts and adjusts from having a stranger in their home, to sending back a close friend. This story is told through the eyes of a little girl, who at the beginning of the story only wants her mummy instead of aunty.

This story focuses on migrant workers coming in and out of a construction site. Embedded is this title is a real experience we had on the way home one day. It is told through the lenses of a little boy and his dad, as they slowly move into a new housing estate.

As the title suggests, this is about a bus driver. How a little boy shares the day to day struggles and practices of his favourite bus driver. This is Humblet’s favourite title in the series and she wants me to emphasize that you should read it to the end!

These are not your typical Children’s Books. No, I do not mean to say they are better. Instead I want to emphasise that they are different. These stories do not have happy endings, they will not inspire creativity or help with language development. They are designed to address specific social issues faced by real people, people uncomfortably near you, near me, but often treated as though they were invisible. These stories are written in response to the negativity surrounding these peoples and issues. Be it about them or against them.

Why use Children’s Story books?

Honestly, it is because we recognise storytelling is a huge part of humanity. Like it or not, to be human is to be a storyteller. As a young child, you crave stories at bedtime, you create a Lego kingdom in your mind, one day you are a knight and the next you are a dragon. As a teen you make up stories about where you were the night before when your parent catches you sneaking through the door at the break of dawn. As an adult you draw up presentations, put together slideshows, photo montages and so on.

We did not want another statistic report, another big news, another website. Over sensationalised reports cause us to develop immunity rather than empathy. Apathy does not develop in an instant, instead years of over censored heavily curated content have trained us in the art of glossing over such news. Another sob story of abuse, another construction site accident, another page to scroll past.

The challenge issued us was therefore to design these social issues and package them into stories even a child could understand. To engage and educate young readers but also to then hopefully elicit a response from the adults reading with them and to them.

We do not think we have done a fantastic job, but we are only just beginning our foray into publishing. Our only credibility is reading to beloved Humblet an average of twenty books a week for the last four years and counting. Despite all our shortcomings, we wanted to write to children and for children. Even though they may be our harshest critics, they are also our greatest hope for the future.

May you enjoy these books with your sons, daughters, nephews, nieces, students and grandchildren. They were specially written for them, with you in mind.